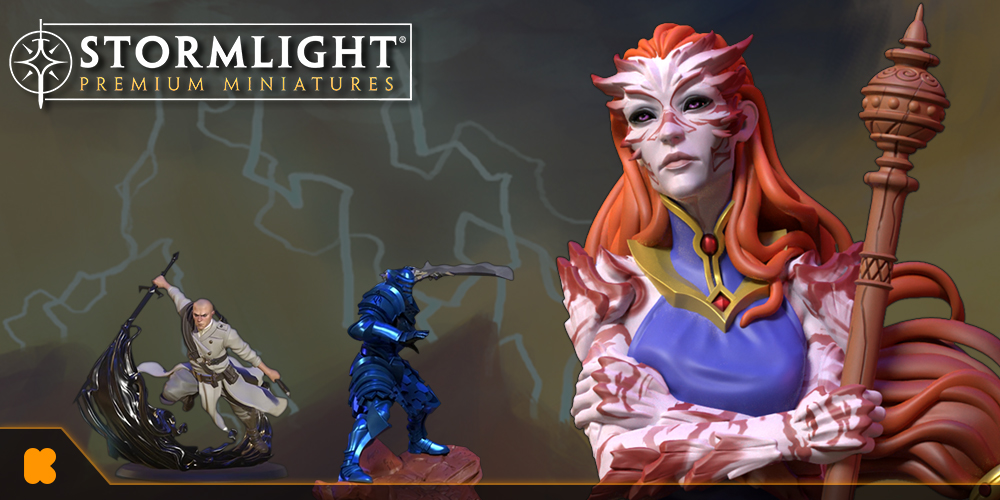 The most anticipated Kickstarter after The Way of King X Anniversary will go live in less than a week: the Stormlight Premion Miniatures campaign, which will bring for the first time ever 3D canonical reproductions of our most beloved characters that we will be able to place in our shelves along with our books, and before continuing, we would like to thank both Brotherwise Games and Dragonsteel for their trust in allowing us to share a Venli exclusive with all of you.

WARNING: The character we are sharing today, Venli, goes through important changes in the third book of the Stormlight Archive series, Oathbringer. All the information you will find during the campaign as well as the minis and figurines displays go as far as The Rhythm of War events.

Mark down the 13th of September in your calendars, and CLICK HERE to enroll the campaign to be notified as soon as it’s live and avoid missing the chance to get these beauties because from our side we can just say… SHUT UP AND TAKE MY SPHERES!

In any case, if you want to have a global view of th campaign, you can check our video. It’s subbed in English :) 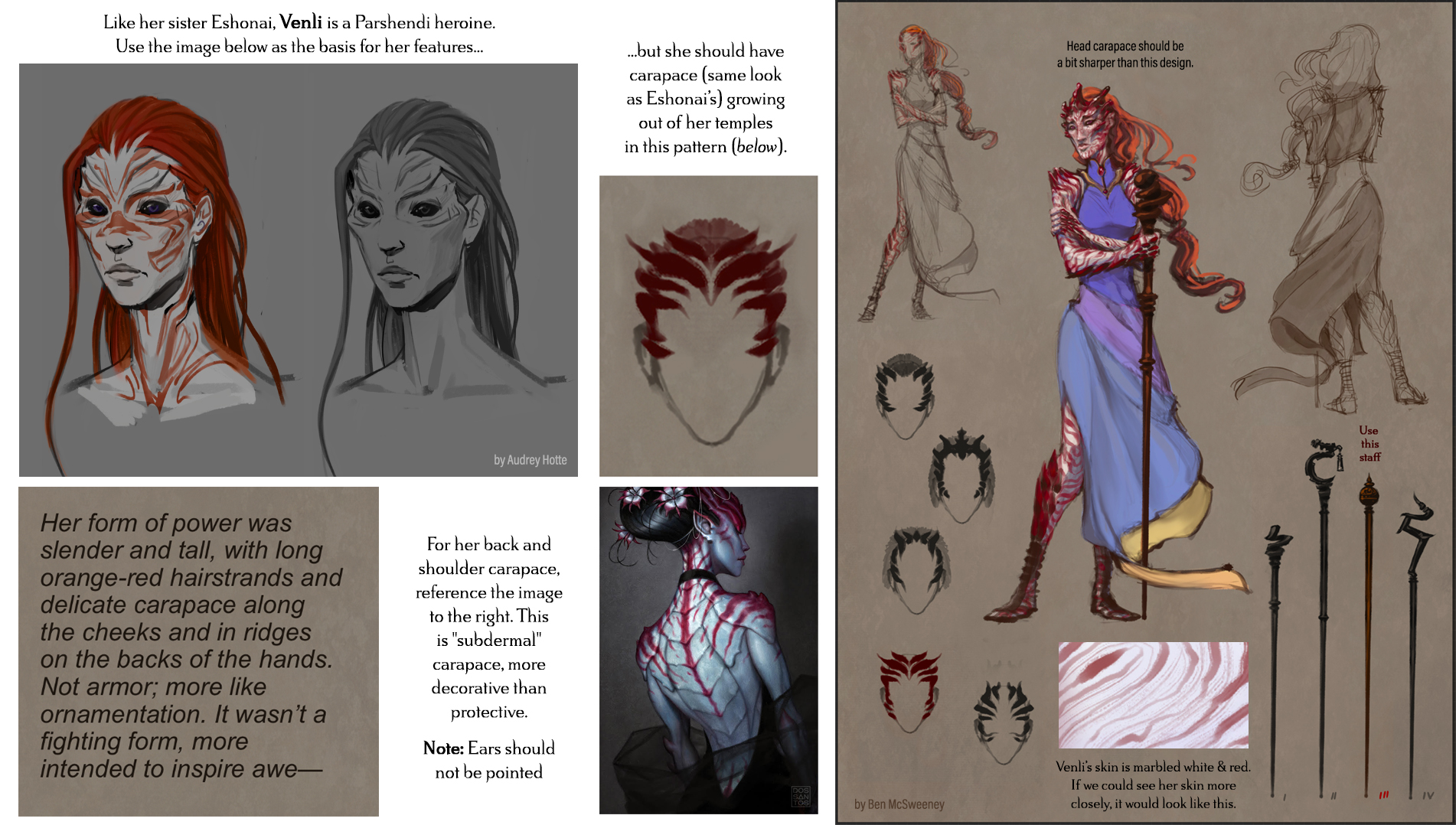 Is this Venli in her envoyform with her scepter as seen in RoW (Chapter 11)?

Good eye! Yes, this is Venli in envoyform. We’ve created four miniature packs, each based on one of the books, and Venli is part of the Rhythm of War Collection. Here’s a closer look at the art brief I put together for Venli, featuring concept sketches by Ben McSweeney and a portrait of Venli by Audrey Hotte. 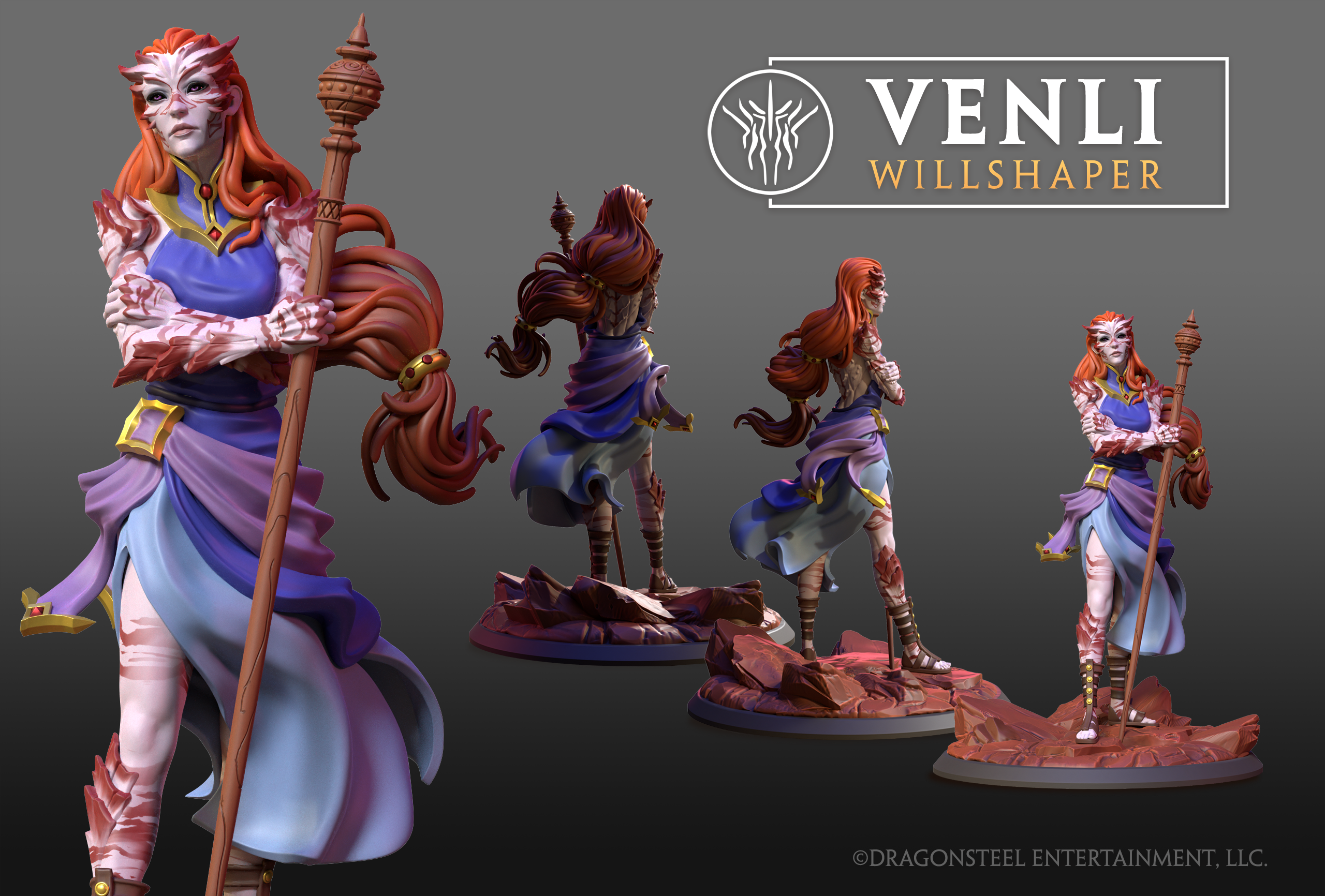 These miniatures are all official designs that have been created collaboratively with Brandon Sanderson and Isaac Stewart. In general you can treat them as canonical, but we’ve stylized certain things due to the miniature form factor. For example, the art brief shows that Venli’s marbling is meant to be more detailed. For this design, we focused on larger markings that a talented painter might actually be able to reproduce at miniature scale.

Venli’s scepter had 4 different designs, how was the final design chosen?

Iteration is a big part of the concept art process. Especially during the early stages, Ben will provide a bunch of options for any new design, like Venli’s head carapace or scepter. We present these to Brandon, who makes the final call. When it comes to poses, Isaac and I also weigh in. Occasionally, something happens at the sculpting stage that changes our direction, so the process has been very collaborative. I don’t think there’s a special significance to shis shape, but it is more «scepter» like, and less likely to be mistaken for a wizard’s staff. When making a lot of our choices, we’ve tried to push Stormlight visuals away from existing high fantasy tropes.

What size is Venli, so we can compare the height of envoyform to a human?

I like how you’re trying to glean canonical details from the miniatures! Luckily, that’s exactly what we want you to do. Our Shallan miniature is 40 mm (1.6 inches), whereas Venli is 48 mm (1.85 inches). We know Shallan is 5’6″ so that means Venli is at least 6’5″ and perhaps even taller. We try to keep the miniatures roughly in scale with one another, but there are times we sacrifice precise scale in order to make sure all the miniatures look detailed. We want more petite characters like Lift and Shallan to look as good as larger characters like Venli or a character in Shardplate.

What are the minis made of?

Our miniatures are made of high-quality PVC. They’ll be manufactured (with injection molding), which means they won’t be fragile like 3D printed miniatures. Using PVC allows a lot of detail while keeping things just flexible enough to avoid breakage.

How many bigger painted «minis» will there be?

The larger figurines (ranging from about 80 mm to 95 mm) are a lot more expensive to mold and produce. They’re produced in a factory, but most of the painting will be done by hand. So right now, we’re just planning four painted characters: Windrunner Kaladin, Elsecaller Jasnah, Skybreaker Szeth, and Shardbearer Adolin. We suspect we’ll get a lot of people asking for more, and that might be possible if the Kickstarter does really well. On the other hand, we want to keep the total number of characters manageable and as affordable as possible.

The modeling is amazing with great detail. We wonder if it will be possible to acquire a bust in bigger size from any of the characters?

Thank you! All of these characters were sculpted at a much higher level of detail than you’d usually use for 34 mm scale miniatures. First and foremost, this was a visual development project designed to give Dragonsteel high-quality character models that they can use for a wide range of purposes: future merchandise, software, style guides… even Hollywood meetings. So while we’re not currently planning larger-scale busts, that’s always an option in the future!

As we’ve been working on this Kickstarter, I’ve specifically been thinking about you and Cosmere.es readers! At Brotherwise Games, we have a lot of experience running Kickstarter campaigns with global distribution, and we have local partners to help with fulfillment in the UK, EU, Canada, and Australia. Wherever possible, we’re covering VAT costs and working to keep shipping costs low. There’s no getting around the fact that global shipping is very expensive, especially since the pandemic, but we’re subsidizing a portion of the shipping cost for every international backer. We’ll have a range of estimated shipping costs on the campaign page, and you can trust us to push for the lower end of that range. It also helps that with this Kickstarter, we only need to ship everything once! So I hope Brandon’s many fans in the EU, South America, and elsewhere can back this campaign with confidence.

Depending on the success of this campaign, do you have any future editions or expansions planned?

Yes. First of all, even though this campaign is just for miniatures and figurines, we’re a game company. These miniatures will be very relevant to our next game based on The Stormlight Archive. If the campaign does really well, there’s also the chance for us to create even more miniatures. This collection focuses on protagonists, but I’d love to do more adversaries, monsters, and NPCs… not to mention a set based on the fifth book!

The Kickstarter is now less than a week away, and we can’t wait to see how Stormlight fans react to the official designs for all these characters. I hope you enjoy the campaign! 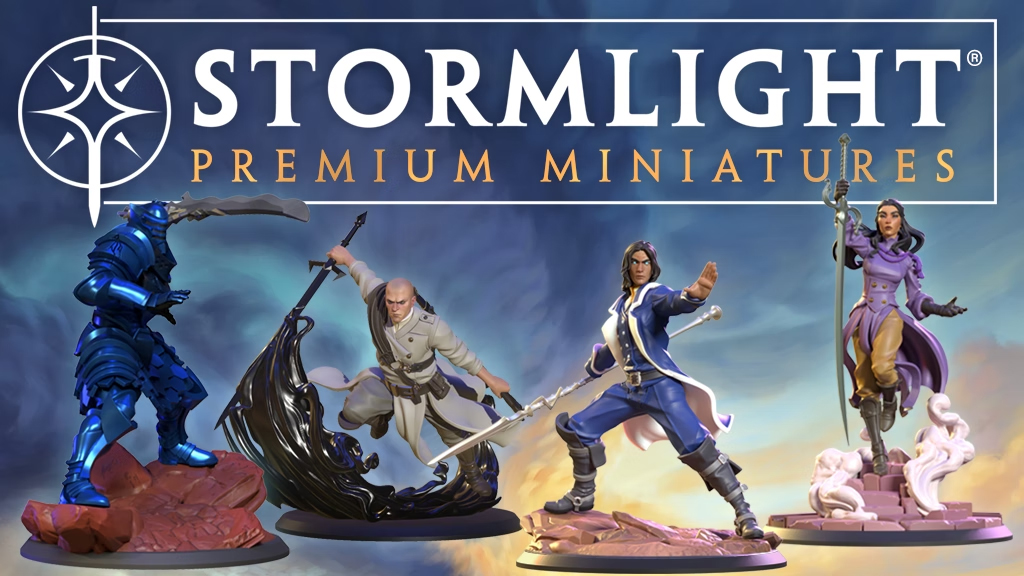 Get a notification when it goes live!